Can someone in the UK souvenir one of these fab posters for me please (for ‘research’ purposes). I find them amazing. Yes, I know, it was the flip-floppery on Brexit, the contempt of the class (failure to purge the party, and inexplicable tolerance of the Blairite Right with their vicous articulation of privilege in a virulently prejudiced class system) and media demonisation. And yes, more youth and more votes and etc.

But this poster is truly awesome: 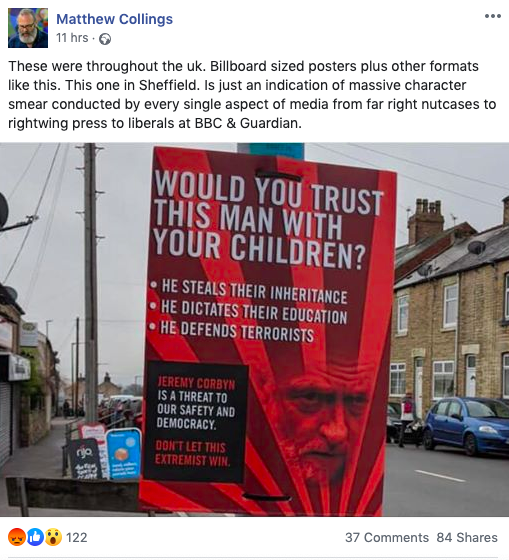 Is this poster even true – crikey, there were posters like this! So bad, I want one. The absolute gobsmacking craziness of the three-toed mugwumps that dreamed these up. Oh, wait, maybe here, and here, and here:

Foolish to ask if Jeremy can sue them – sue who? – for this kind of smear. Its of the level of the “For Wider Streets Vote Conservative” poster (that I love, and used in Australia) or the Saatchi and Saatchi (Thatcherite) campaign posters of yore. Only lawyers would gain from such a move. And, well, maybe that will permit the luvvies to indulge in still more endless recriminations, rather than getting in the way of a larger necessary project. They will never be the ones able to transmute the interest in the ‘manifesto’ into something that really is for the many.

The point is, if you can hear this outside the triple echo-camber, with the three scourges of pointless reaction: going off social media for a while, sniping at everyone, or I told you so (well, I did – can only support labour for so long) you can get on with generalising and universalising the so-called little Britain manifesto. Then, whatever the vote tally that so reassures you however you do the sums, it is still the case that a left labour step towards a larger communist future has to be better than what Boris has in store.

(NB. Before I knew he was labour party, that Jeremy bloke came to demonstrations I’d helped organise – eg a London group against the Internal Security Act in Malaysia, a protest of 6 people outside Malaysian Airlines office decades ago. So, you know, if he keeps on, it is a good thing. He does not have to be Jezza the superstar to do worthwhile things). So, in return for joining an overlooked cause, please see the video:

Then, finally, to bring something forward from elsewhere,there is Neil Davenport, who I also knew as a journalist in Manchester long ago. He seems spot on to say:

‘It is wrong to assume that a re-run of mild social democracy was to blame for Labour’s catastrophe on Friday. Instead it was a reliance on continuity Blairism that led to the collapse of its northern heartland. There are a number of key aspects of Blairism that Corbyn and Momentum continued and went further with. The most obvious one was Blair’s peace with the EU and outright Europhilia, a position miles away from Labour’s old left and ex miner’s in the north. Secondly, the replacement of class solidarity with institutionalising diversity and identity politics, with the narrative of suspicion and at times outright hostility towards its traditional constituency.”

“to culturally reform the masses along middle class hairshirt lines”

Yes – it is high time to abandon that moralising sermonizing class and tone – the very middle-class hairshirt which is so beloved of moaners of many stripes. It has always been a less scratchy version of hairshirt than usually imagined. I mean, it seems like it comes in a whole variety of designer styles, slinky, sexy, never take it off, dom-fem versions, versions approved by your valet, gortex and microfiber outdoor hiking versions and more. Suits you sir, they say. Wearing political t-shirts with a 800 thread count. That hairshirt comes tailored and home delivered in Rugby and Superdry options. Nothing should be moist. They for sure aren’t taking it off for a proper scratch anytime soon.