This is an incomplete list of academic articles (quite a few old ones still to be scanned yet) and an even less complete list of journalism… More to come… [see academia.edu for more, including drafts of recent history work]…

Co research in Vietnam for the anthropology classroom  In Education Philosophy and Theory, 2020, with supplement rept_a_1752187_sm3452

The Pecuniary Animus of the University in Education, Philosophy and Theory, 2020

Comparative Urban Methods ISSH2019Proceedings in the Conference Proceedings for ISSH2019

What did you do in the war? Revisiting the WW2 memoirs of Stoker Thomas Mouat Tate, in History and Anthropology 30(5) 2019

‘The Working Day’ in In-Between Fiction and Non-Fiction: Reflections on the Poetics of Ethnography in Literature and Film Edited by Michelangelo Paganopoulos, 2018, Cambridge Scholars

Citizen Marx/Kane – My text on reading Capital in the cinema- with Orson Welles (in ‘Marx at the Movies’ – edited Kristensen and Mazierska collection 2014 [email me for details if needed]).

Interview by State of Nature: – http://www.stateofnature.org/johnHutnyk.html – 2010;

Critique of Everything – Journal of the Finish Anthropological Society – 2011

Undercover transportsPDF – from What Does a Chameleon Look Like? eds Menrath & Schwinghammer – 2011;

‘Pantomime Paranoia in London, or, “Look Out, He’s Behind You”‘ from Popular Music and Human Rights, ed Ian Peddie – 2011 – by grace and favour of the publisher;

with Laura King, ‘The Eighteenth Brumaire of Gaius Baltar’ from Breaching the Colonial Contract: Anti-Colonialism in the US and Canada, ‘Chapter Twelve – King and Hutnyk‘ [spoilers to end of BSG S03E20) – 2009;

The Politics of Cats from Stimulus Respond 2007;

an article on Asian Communists in the UK from Social Identities 2005;

a piece on Fun*Da*Mental from South Asian Popular Culture 2005;

Michael Palin’s Himalaya in Journal of the Moving Image 2005;

Hybridity from Ethnic and Racial Studies 2005;

Photogenic Poverty: Souvenirs and Infancy from the Journal of Visual Culture 2004;

Bataille’s Wars from Critique of Anthropology 2003;

Complicity from the Assembly catalogue 2000

Hybridity Saves: Authenticity and the Critique of Appropriation Amer-Asia 1999;

Adorno at Womad from Postcolonial Studies 1998;

The Authority of Style Social Analysis No 21 1987

FULL TEXT OF Dis-Orienting Rhythms: the politics of the new Asian dance music 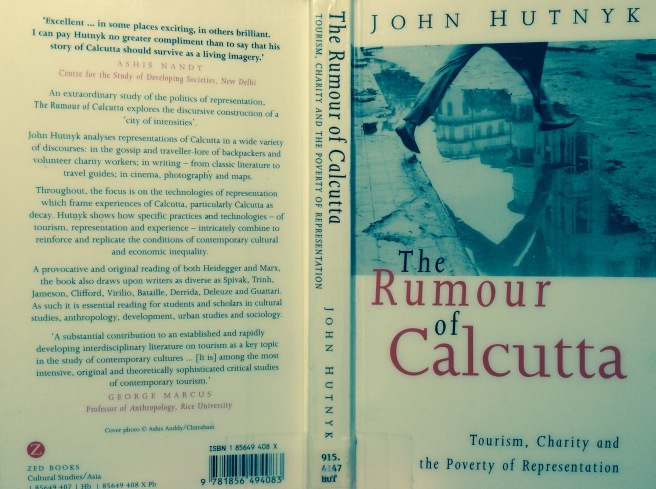 22 years ago my first book was typeset and laid out in the days before electronics – well, an electric typesetting machine was plugged into a wall, but no digital file was produced. Nevertheless, I had crossed out the digital rights clause in my contract with Zed so I own this. At last some kind anonymous soul has bootlegged it and set digital copy free on the nets, though its a large scanned file and the bibliography was left off (I’ve made a rough scan of the biblio but that too is a large file). Nevertheless, notwithstanding, and such like phrasings, the book is still one of which I am proud, if nothing else for trialling a way of citing tourist backpacker-informants, for its stuff on photography and maps and for the reviews it got (and indeed keeps getting discussed, for example on films – see diekmann2012) and especially for its critique of charity and what charity is for. In the context of do-gooder well-meaning hypocrisy, the effort of charity workers serves wider interests as well as their own, and only marginally any individuals they help – who would be better helped in better funded state-run facilities if the funds extracted through business-as-usual colonialism were, you know, made as reparations for the several hundred years of colonial plunder. Ah well, the critique stands up, the charity industry sadly thrives, second only perhaps to weapons in terms of so-called development, writing books does not yet always change the world as much as you’d like (and no, I did not ever think a book would single-handedly stop Mother Theresa, but…).

I would welcome new readers.

And this retrieved by Toby:

Too Much News In the World – Lets make some more. The Paper March 2011

Time Out for Scheherazade. The Paper April 2011

Other old stuff and occasional pieces:

Technocratic Dreamtime in Malaysia, On the Multimedia Super Corridor, 1997 from Mute.

.’Translating Appearance’ in The Devil’s Party ed Tom Bunyard 2008 (my piece starts page 50, you have the whole book here)