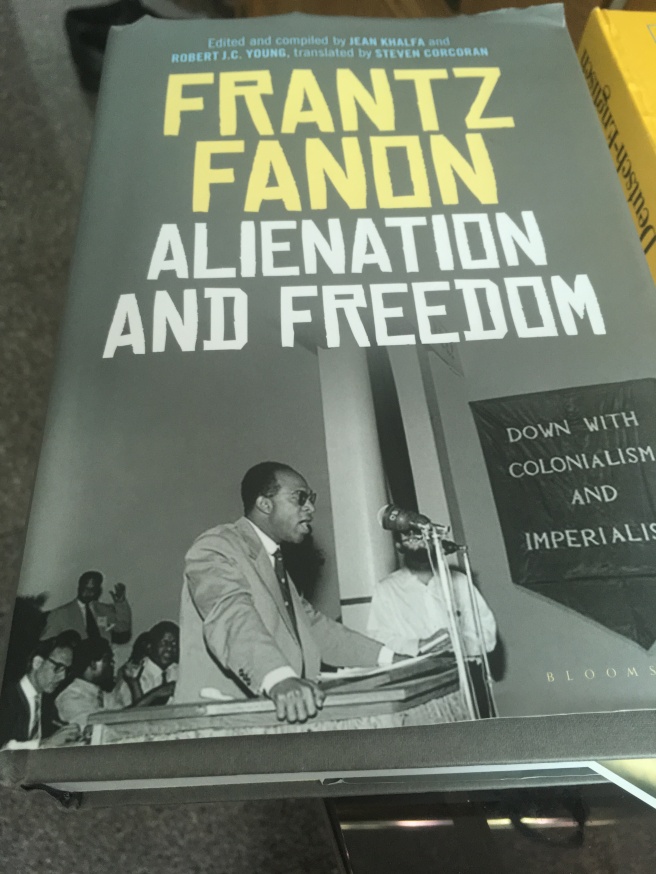 And from his letter of resignation:

A society that forces its members into desperate solutions is a non-viable society, a society that needs replacing. The citizen’s duty is to say so. No professional morality, no class solidarity, no desire to refrain from washing the dirty laundry in public, can have a prior claim. No pseudo-national mystification finds grace when up against the demand to think (Fanon, Letter to the Resident Minister, 1956)

And then I read some more – the whole volume is great and basically 800 pages in two days later, I feel like I’ve learned something and now have to go back and read The Wretched of the Earth again. So many reasons to be a fan of Fanon. For example, around the time of Sartre’s Critique of Dialectical Reason, when we know from De Beauvoir that Sartre was eating amphetamines by the handful, Fanon spends three days non-stop talking with Sartre. This is before Sarre rattles off the intro to Wretched.

Then on his library – at the end of the book there is one of those ‘what was in his library’ things. Fanon has some Plekhanov, a bit of Lenin, Ho Chi Minh, not much Marx, (the 18th Brumaire of course, the Critique, Anti-Duhring and something else), but lots and lots of Mao. I guess pamphlets he may have picked up in China. Also, Merleau-Ponty, Bachelard and a few other French thinkers of the 50s.

And Freud. It seems Fanon annotated his copy of Interpretation of dreams with quite hostile marginalia. For every time Freud uses the word ‘primitive’, as in ‘in primitive cases the sex drive is…’, Fanon would write the word ‘Bastard’ in the margin, with an angry exclamation mark. Choice. He was similarly unimpressed with Jung’s primitivism, though I have not found out what he thought of Mandalas and all that. Of course Fanon did start off heavily committed to electric shock treatments (to ‘clear’ a patient before rebuilding their personality) so criticism of Freud is worth a bag of salt, but he also went on to develop institutional therapy, and indirectly – through a follower – his Tunis clinic influences Guattari the the Bordo, and he was a huge practitioner of open psychiatry, that I now find out was started pretty much in Nottingham in the 19th century or so with the Mapperley clinic, eventually ransacked by Care in the Community, and now a National Health Trust facility that has been in deep trouble for various irregularities with funds and because the orderlies were writing the facebook comments on behalf of patients ‘who could not write for themselves’ or something like that (some TV expose).

All of this comes after reading Alienation and Freedom. How great to have a new Fanon collection of previously obscure and unpublished work, including all his psych essays and his dissertation. Alienation and Freedom basically doubles the amount of Fanon text in the public domain. And the critique of colonialism is a sharply relevant now as it was when France was the brutal colonial power it still tries to be under the armed wings of NATO.