Atrocities and alibi’s for dirty colonial deeds of the ‘robber baron’ Clive and his mates. Here is a plaque for John Zephania Holwell, who wrote his dramatically claustrophobic survivor tale several months afterwards as a kind of post-factum justification for the subsequent slaughter at Palashi. He goes on to be Governor and erects a monument to his own heroism, which survives 40 years and is forgotten until Mark Twain asks about it – thanks Mark. Pah, the monument is rebuilt – and still stands today, though moved to the grounds of the nearby church, partly because Netaji Subhas Chandra Bose and crew slapped it with a  slipper, and chisels. 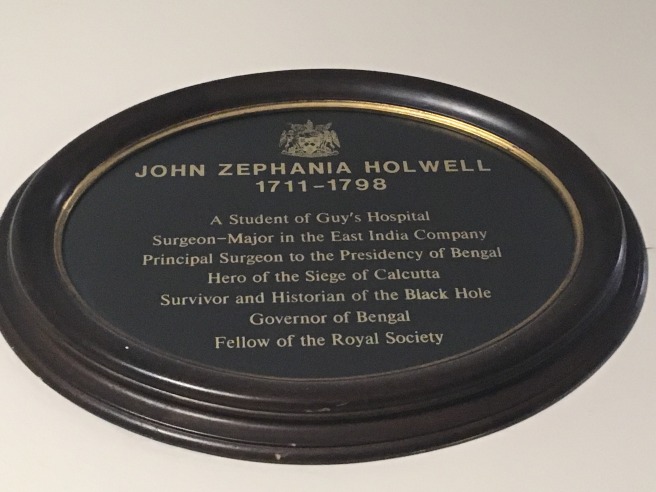 Thanks to Claire who found this at King’s Guy’s Hospital. A plaque to the apologist of Palashi. I suppose it is too minor an atrocity – one among many – for the Rhodes must fall group to be deployed, but some annotation is surely necessary.

This chapter may explain why this is such an outrage. The man built a monument to his lies.