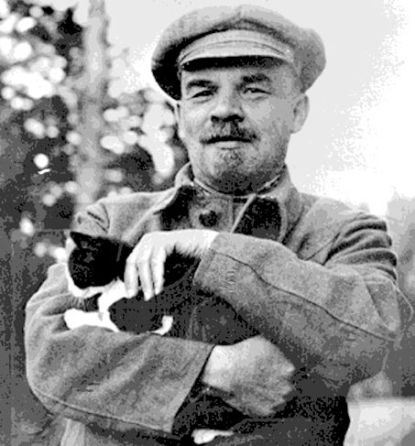 Laugh out loud passage in Rosa Luxemburg’s letter of April 2 2011 to Kostya Zetkin (Clara’s son) about Lenin’s visits and the sharp dialectical criticism of Lenin by Mimi the cat.

While there are many who would criticise Lenin without reading or meeting him, the critical support that Rosa provides – the contestation, disagreement and solidarity, are exemplary, as is the cat.

And it confirms all I wanted to say about the politics of cats  – The Politics of Cats – first version, later published in Stimulus Respond in an article of which I am still quite pleased – available as part of Handpicked, by Pavement books.

Yesterday Lenin came, and up to today he has been here four times already. I enjoy talking with him, he’s clever and well educated, and has such an ugly mug, the kind I like to look at … Mimi [Rosa’s cat] … impressed Lenin tremendously, he said that only in Siberia had he seen such a magnificent creature, that she was a barskii kot—a. majestic cat. She also flirted with him, rolled on her back and behaved enticingly toward him, but when he tried to approach her she whacked him with a paw and snarled like a tiger.