The Commission of Customs Scotland to the Lords Commissioners of the Treasury, reporting on the subject of trade with India, in 1812, examined Earl, Osborne and Ferrier (traders) on the question of smuggling ‘tea’. The answer is instructive – smuggling will increase if EIC ships are permitted to trade in Scottish waters. That is, lets be clear, English ships smuggling ‘tea’ to Scotland. Recall that these ships mostly carry other goods than tea, but in smuggling, the trick is not to declare. Records reported elsewhere – I think in Judt, have to check back – indicated some half a million pounds worth or goods a year was ‘pilfered’ from vessels in the Thames at London – that’s half a million of the declared consignments. The need to read between the lines – what does other ‘East India Goods’ really mean, and what does it not mean? The remittances off the books was a healthy trade for, in Feldbaek’s examples, for Danish shipping out of Serampore. 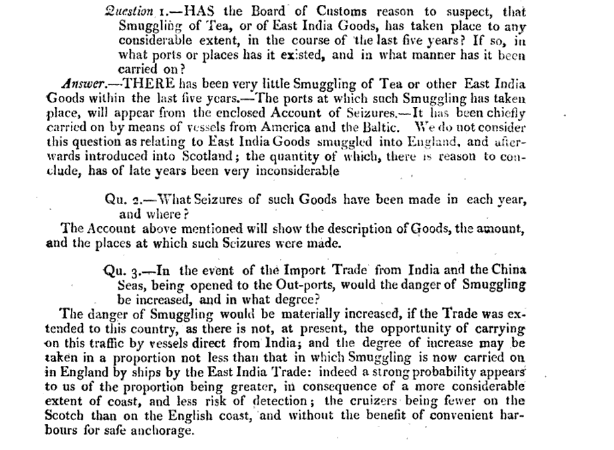