Apparently on sale at National Trust sites are mugs with this marking underneath. 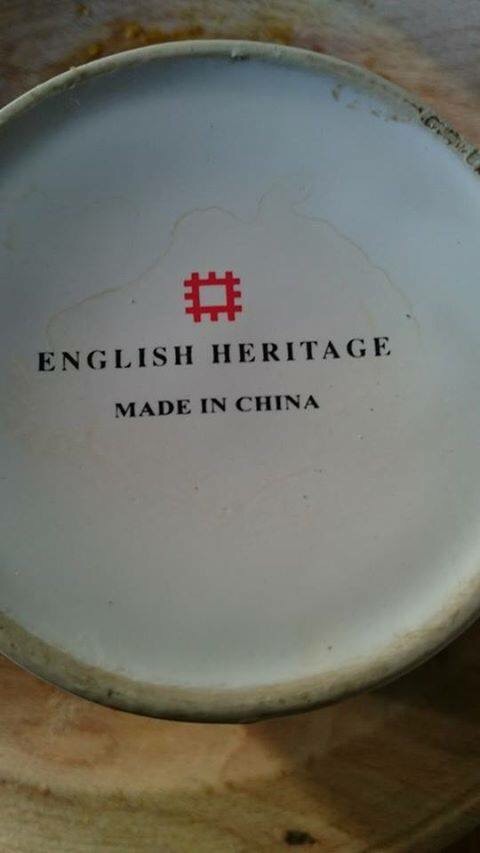 Thanks Katherine S for the pointer. My view is to welcome this as an historically accurate statement – English heritage was made in China, also known as profiting from the Opium trade. First time I’ve seen this NatTru admission but it has to be welcomed. There was no-one willing to discuss this at Powis Castle (home of Lord Clive) when we visited.

Important to read Dan Glazebrook and Sukant Chandan as they take apart the British ‘foreign policy’ machinations that help no-one here or there:

Rereading Jay Murphy’s book Artaud’s Metamorphosis and thinking about the 30,000 pages of notes Marx is said to have written in the last ten years of his life – and which are only slowly being released through the MEGA. Then find Jay has the following on page 207:

Artaud’s last works are above all, an action, a setting of forces into motion. In examining how he accomplishes this, largely from the springboard of the copious 406 lined school notebooks of which there are some more than 30,000 pages, at times there is the temptation to mimic his method by fracturing the field, separating out the elements that come into conflict, such as sound image text, or even their constituent bodily sources, and it is by such recourse that I isolate the treatment of the face and the voice at the end of this chapter; to see better how they interact, meld, hover, disintegrate or invade other elements…

I won’t reproduce his analysis because the whole book needs to be bought, and the notes still need to be written, but along with Walter Benjamin’s obsession with certain notebooks, whatever was in that case, add also anthropology’s note-writing fix exemplified in Mick Taussig’s drawings for I swear I saw This, and the entire complex of more or less uncanny parallels that revolve around the lined page, schoolbook or not, I’m hankering to generate some sort of method for handling the detritus of the (allegedly) declining years. Plus starting a new journal for my eldest now.

Artaud’s Metamorphosis is available in Berlin at Buchhafen. Or by post from Pavement.