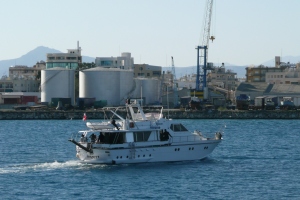 [Readers will know I do not endorse charity giving – see Rumour – but note the distinction between buying a boat for the Free Gaza movement and other good causes. This one must float. Lets buy a boat, ahoy].

AN URGENT APPEAL TO HELP BREAK THE SIEGE OF GAZA

“From the groundbreaking work of Gandhi and King to the ongoing example of the Free Gaza Movement, we can discern the transforming power of nonviolence at a crossroads in our history.”
-H.E. Miguel d’Escoto Brockmann, President of the UN General Assembly

we desperately need your help. It’s with heavy hearts that we have to inform you that the Free Gaza ship, the DIGNITY, has been lost outside Larnaca port in Cyprus. Fortunately, no one was injured in the accident.

On 30 December 2008 the DIGNITY was rammed by the Israeli navy while on a mission of mercy to deliver critically needed medical supplies and doctors to the war-ravaged Gaza Strip. Thanks to the heroic efforts of its captain and crew, the DIGNITY was able to find safe harbor in Lebanon, later making its way to Cyprus for repairs. Early this morning we received a call from the Harbor Master in Larnaca, informing us that the ship was taking on water. While attempting to tow her to safety, the ship went down. An inquiry has begun into the circumstances surrounding her demise, possibly due to storm damage suffered during the night.

All of us in Free Gaza are deeply saddened by the loss of the DIGNITY. Since the Free Gaza Movement was founded in 2006 we have worked hard to overcome the siege of Gaza. Israeli policies of racism, ethnic cleansing and the brutal military occupation of Palestine demand our determined & direct resistance. When our governments fail to act, we – the citizens of the world – must stand up and make our voices heard.

To date, the Free Gaza Movement has organized seven voyages to Palestine, successfully arriving in Gaza Port five times. We have brought dozens of human rights workers, journalists, parliamentarians, and others to Gaza, as well as tons of desperately needed medical and humanitarian supplies. Free Gaza boats are the first international ships to sail to the Gaza Strip since 1967.

None of this would have been possible without you, our friends. Your emotional, political, and financial support is the foundation of all our successes.

We’re turning to you today, because we need your help now more than ever. Please visit our donate page for more information on how you can help ensure our continuing missions to Palestine. Please give generously.

Despite our loss today, we will not be deterred. In one month we will return to Gaza with the HOPE FLEET, a flotilla of cargo and passengers ships carrying significant amounts of humanitarian and reconstruction aid. Thanks to your support, we will go to Gaza again and again, until this siege is forever ended and the Palestinian people have free access to the rest of the world.

This is our solemn promise.

PS: We’re suggesting a donation of €50, but please give what you can. Your contributions will go directly toward the purchase and overhaul of new ship that can break through the siege of Gaza and help connect Palestine with the rest of the world.